The State Colorado Oil and Gas Conservation Commission (COGCC) approved the Livingston Pad permits at the end of the business day on Friday, June 1.  Tami Yellico, Director of Strategic Initiatives for the City, wrote the news to Council and also notified a few citizen leaders. In her email, she reminded Council that “Extraction is still required to meet the terms of the Operator Agreement before drilling on this pad can begin.”  The text of the email and the main points in the June 1 notice from the COGCC regarding the Livingston Pad permits can be found below.  This includes COGCC responses to citizen comments, so please look to see if your concerns were addressed.

The Livingston Pad Form 2A states that 19 wells will be drilled from the surface location.  13 of those corresponding 19 Form 2s were approved, as three are still being reviewed by COGCC Engineering and three have not yet been submitted by Extraction (XOG). 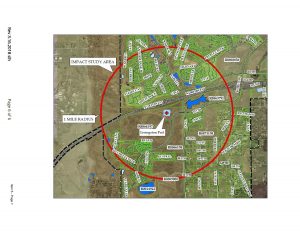 The Comprehensive Drilling Plan (CDP) has not yet been approved by the City Staff but will begin Council review on June 12. The Oct. 24 Operator Agreement (MOU) between Extraction and the City requires that the City approve Extraction’s CDP before Extraction can begin drilling.

The Interchange and Northwest Pads were granted a July 30 hearing due to the October request of Adams County officials related to those pads being sited in close proximity to their residents.

THE TEXT OF THE EMAIL

Here is the text of the June 1 4:39 pm email from the COGCC to Broomfield Director of Strategic Initiatives Tami Yellico.

SOME MAIN POINTS FROM THE JUNE 1 NOTICE FROM THE COGCC

Public Comment Summary: “The dominant sentiment expressed in public comments received by COGCC was the request for COGCC to deny the permit applications based on a variety of reasons. However, it is not within COGCC’s statutory mandate to deny a permit for a well that the operator has a demonstrable right to construct and mineral interest to develop unless the application fails to comply with COGCC Rules or the Colorado Oil and Gas Conservation Act.”

All of the public comments are listed on pages 30-69.

“Of the site-specific comments, most commenters expressed concerns about:

p. 7 Operator Agreement with Extraction and Broomfield- “comport with”

The COGCC acknowledges that the Commission instructed “staff to ensure that Extraction’s Form 2A applications in Broomfield ‘comport with’ the Operator Agreement.”  However, it states that the negotiated BMPs [Best Management Practices] are “sufficiently protective of public health, safety, welfare and the environment, including wildlife resources…the exact terms and conditions of the Operator Agreement remain a private party agreement between two outside parties, and those terms and conditions are enforceable as civil matters by either party not the COGCC.”

p. 7 Form 2A processing and approval prior to finalizing the Broomfield CDP

The filing of the drilling permits is independent of Broomfield’s review of the CDP, according to the COGCC.

p. 8 Incorporation of BMPs on the Operator Agreement into the Form 2A and Form 2

The State had not allowed all of the BMPs [Best Management Practices] to be attached to the permits.  The June 1 notice states, ““Extraction submitted the Livingston Pad Form 2A with the BMPs from Exhibit B. COGCC evaluated these BMPs during the technical review and determined that many were not appropriate for inclusion on a Form 2A (COGCC’s evaluation criteria is explained below). COGCC and Extraction worked to develop an alternative set of BMPs for the Form 2A and COGCC included Broomfield in this revision process. The BMPs incorporated into the Livingston Pad Form 2A are enforceable by COGCC and address human health, safety, welfare and the environment.”

The COGCC notes that these made up the majority of the comments, but the only item that was addressed in this section was related to the Extraction Windsor accident.  Neither the Berthoud accident nor any of the many peer reviewed health studies mentioned in the comments are addressed.

“Extraction has reported to COGCC and Broomfield that it has examined its procedures and has taken numerous measures in response to the [Windsor] incident that they are implementing at all their Oil and Gas Operations, including at the Livingston location in Broomfield.”

The COGCC does a lengthy discussion of this and stated that the “COGCC has been aware of Broomfield’s plans to construct a drinking water reservoir.”  It discusses safety measures required of XOG, a leak detection plan and a commitment by XOG to “bi-annual flow line testing per COGCC regulations. Testing flowlines twice as often as required by COGCC allows for earlier detection of potential leaks.”

The COGCC states that the “Court of Appeals’ decision in Martinez is currently under review by the Colorado Supreme Court.”

The COGCC states that the BMPs will address all of these concerns.

The COGCC states that the pipelines will reduce these concerns.