As the citizens of Broomfield began to mobilize their grassroots effort to protect the health and safety of Broomfield residents in the summer of 2017, they were confident that the concerns of Broomfield voters would prevail.  However, the oil and gas industry quickly poured over $300,000 into the campaign to oppose the measure, as reported in the first campaign finance filing.

On November 7, Broomfield voters spoke and Ballot Question 301 was overwhelmingly passed by a vote of 53% to 47%.  This huge win occurred despite another large influx of opposition funding, as shown in the final campaign finance reports posted on the city website.

The final tally of campaign $$ for both sides of Ballot Question 301 are summarized in the  2 charts below.   The 1st chart shows a total of $478,473 injected by the Oil & Gas Industry to defeat the issue.  As late as Nov 3, Vital for Colorado still added $90,000 in cash and $43,786 in non-monetary contributions to the cause.   The 2nd chart shows a total of $48,090 collected to support the protection of the health and safety of Broomfield residents for Ballot Question 301.  The funding gap ratio for the final tally was an outrageous 10:1.

The question posed in my Oct 17 blog still remains.  Why is the Oil and Gas Industry afraid of a measure to protect the health and safety of citizens regarding oil and gas development?  Broomfield citizens must remain vigilant as the City of Broomfield moves forward to implement Ballot Question 301. 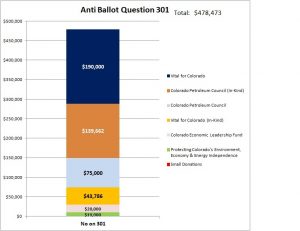 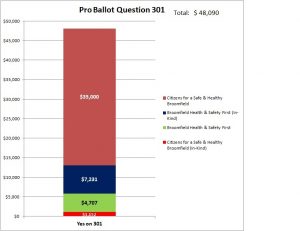