On October 31, the Colorado Oil and Gas Conservation Commission (COGCC) officially changed the status of the Form 2A permit for the Acme Pad to “delayed.” This is a newly created COGCC status representing that no COGCC decisions on this pad will be made until after COGCC rulemaking regarding SB19-181 revisions are complete.

The proposed Acme Pad is in the Town of Erie, just north of Anthem Ranch and Anthem Highlands in Broomfield. Its proposed location was approved by the Erie Board of Trustees after Crestone proposed to put a multiwell pad at the Vessels site where Erie had planned new development. The Town of Erie currently is in the process of revising its oil and gas regulations and zoning in its Unified Development Code, and a new version is scheduled to be posted on November 4. 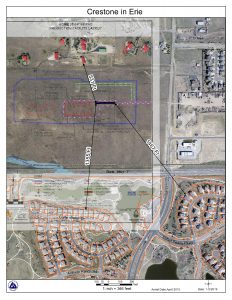 You can read the previous Acme blog here.