In anticipation of an August 1 COGCC hearing on the drilling permits for Extraction Interchange and Northwest Pads sited in Broomfield, Adams County filed a July 16 protest document that asks that the COGCC “not approve the Application until all the alternative sites (Huron, United, Sheridan, and Lowell) are evaluated as potential alternative well locations.”  The four named sites were the original sites negotiated by Broomfield and Extraction for the pads until a last minute change to the current sites of the Northwest, United, Interchange and Livingston Pads was set by the October 24 Operator Agreement between Broomfield and Extraction.  The Adams County document argues that “negative adverse impacts to health, safety, welfare and the environment of nearby residents of the Northwest Estates and Mustang Acres communities” could be “significantly mitigated” by moving the wells from their current proposed sites.

This hearing is unprecedented because it will be the first time that the COGCC has granted a local government standing to protest drilling permits when the pads are sited in a nearby jurisdiction.  This hearing was granted to Adams County at the October 31 COGCC Extraction spacing unit application hearings when Adams County officials complained that they had been left out of negotiations between Extraction and Broomfield and there was extensive discussion about how the permits would “comport with” the Operator Agreement.  Speculation abounds as to the implications of the COGCC granting an alternative site analysis as a result of the August 1 hearing.

The protest states that Adams County’s witness will be Local Government Designee (LGD) Christine Dougherty.  An LGD is the assigned liaison between the COGCC and a local government.  Interested parties are listed as Extraction Oil and Gas and Broomfield LGD and Director of Special Initiatives Tami Yellico.

In Exhibit 1, Adams County Special Counsel Jeffrey Robbins states that Adams County was aware of the four original pad sites of Huron, United, Sheridan and Lowell and “had no concerns with the original locations.”  The document objects to the Northwest and Interchange Pads being sited in Broomfield Open Space which was previously designated by Adams County and Broomfield to be a “buffer for Northwest Estates and Mustang Acres residential communities” from Northwest Parkway. 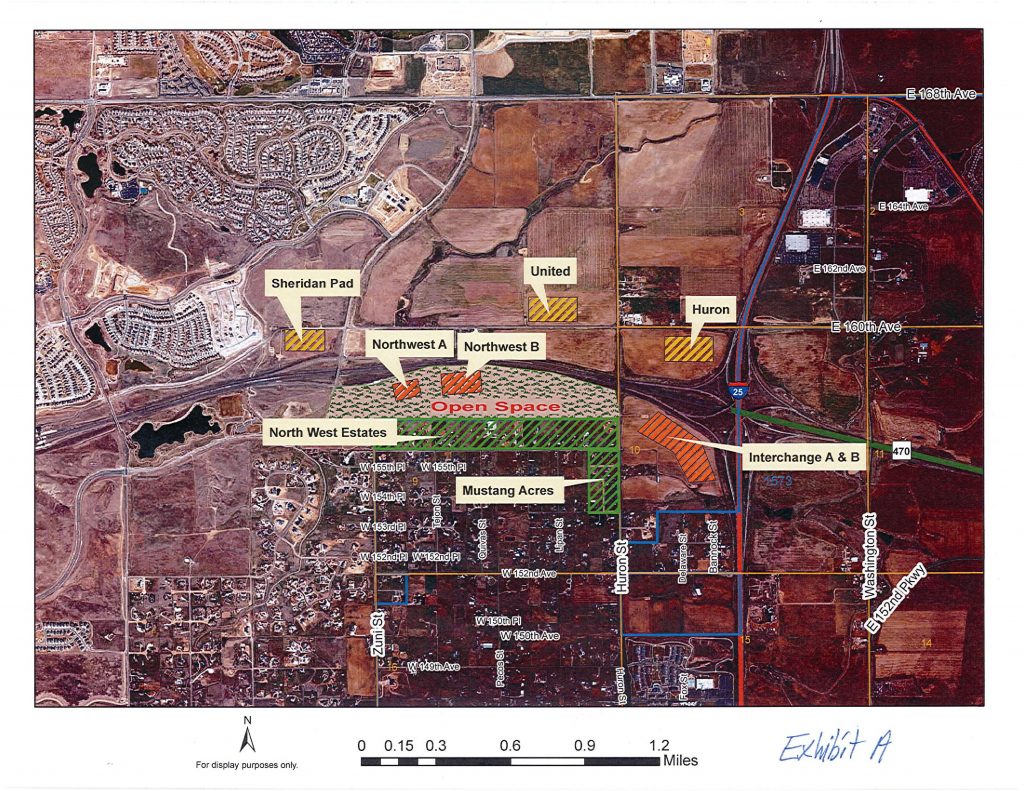 In the protest, objections are raised to the construction of a new access road for the pads that will create truck emission, dust, noise and lighting problems for nearby Adams County residents.  The former pad locations were “on undeveloped agricultural lands that were bordered by existing public roads” and Extraction had stated that it could “access the targeted mineral deposits” at those sites, a document reference to the COGCC’s mandate to not waste mineral resources.

In a disjointed process, the COGCC already approved the Livingston Pad permits on June 1. At the time, Director of Strategic Initiatives Tami Yellico noted that “Extraction is still required to meet the terms of the Operator Agreement before drilling on this pad can begin.”

In the current background of this hearing is the ongoing contention between Broomfield and Extraction about the Comprehensive Drilling Plan (CDP), which was required by the Operator Agreement.  In a June 15 letter to Broomfield City Manager Charles Ozaki, Extraction Oil and Gas stated that the City was in breach of contract because it had “engaged in bad faith by unreasonably withholding approvals and attempts to impose new conditions of approval that do not exist either in the agreements or law.”  Then in a very forceful June 29 six-page letter to Extraction Attorney Eric Christ, City and County of Broomfield (CCOB) Attorney T. Shaun Sullivan notified Extraction that it was in breach of contract due to “Extraction’s unwarranted insistence that Broomfield is in breach and its refusal to make any revisions or additions to the CDP [Comprehensive Drilling Plan].”

Citizens wishing to make comments at the August 1 COGCC hearing will be able to do so at 9 am.  Please look for further information coming shortly in our blog.