The experiences of Wildgrass resident Shannon Hammel with the beginning of the Extraction project convinced her that she had to attend the December 4 Council Meeting to make Public Comments, despite her reservations about never having previously spoken before Council. Ms. Hammel described the surprise she felt when her car bottomed out on Sheridan Road and her frustration with the loss of an unrelated complaint she filed to the City’s Oil and Gas Complaint System on Nov. 16.  Responses from the City indicate that Extraction will be made to pay for road repairs but Ms. Hammel expressed her bigger concern if “the people working on this project have the correct experience to drill in such a populated area.  At this time, it does not appear to be the case.”

Ms. Hammel described how during the previous week that Sheridan Road just west of Lowell “bowed severely after big rigs were drilling both inside and outside the fence Extraction put up” while at the same time she observed “a ton of workers out pointing to the road.”  Her car bottomed out and a few days later her husband “going 15 mph under the speed limit…almost lost the Christmas tree off the top of his car.”  She stated that recently added “slow” and “bump” signs did not give the driver adequate warning. 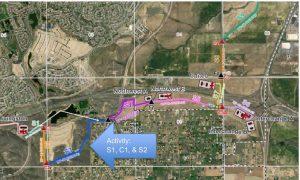 “The roadway heaved during Extraction’s boring of the large (20″) line on Wednesday.  Boring was stopped and a relief hole was drilled to relieve the mud pressure.  The bore was then completed.  Broomfield staff and Extraction agreed that the best course of action is to complete the two smaller bores (12″ and 8″) and then assess damages and make repairs to the curb, gutter, sidewalk, and asphalt roadway) as determined by a geotechnical investigation and  Broomfield’s Public Works Department.”  See the map of Extraction’s planned pipeline work on this page or here.

Ms. Hammel pointed out that she understood that Extraction would pay for the damages, but that in the meantime drivers were forced to drive on unsafe roads and would later be inconvenienced while the intersection was under repair.

On Nov. 16, Ms. Hammel had also reported a complaint to the City’s Oil and Gas Complaint System after she and other neighbors went outside and smelled an intense gasoline smell which one neighbor said “left a bad taste in her mouth well after she walked inside.”  The Xcel employee who arrived to answer Ms. Hammel’s call stated it was not natural gas, but he did notice an intense chemical smell in the entire area.  The North Metro fire department recommended that Ms. Hammel file an Oil and Gas Odor Complaint with the City.  Ms. Hammel received an automated response to her Nov. 16 submission that an investigation would occur with a result reported to her within five business days.

It was not until sixteen days later that Ms. Hammel received a reply from Laura Davis, Broomfield Assistant Director of Strategic Initiatives.  It stated, “One of the employees responsible for the system left the City and County of Broomfield and when her accounts were disabled as part of Broomfield’s offboarding process, it created an issue with the complaint system.  Specifically, the form that you completed online did not get posted in the system where staff is notified and can see it.  This situation has been corrected and there have been safeguards implemented to ensure this does not happen again.”

Ms. Davis also stated that, “Since over two weeks have transpired since you submitted your complaint, City and County of Broomfield staff were not able to investigate the situation that you reported.”  Although Ms. Hammel was very frustrated that the investigation could no longer occur, she expressed her optimism that the Complaint Process would work in the future.  She also added that she was hopeful that the City could “pass on the cost of running the system to the people causing the issues.”

In her Public Comments, Ms. Hammel relayed that the complaint of Anthem Highlands resident Mackenzie Carignan was also lost.  Ms. Carignan had told Ms. Hammel “of her frustration with the City losing her complaint, the lack of accountability that it showed, and how it makes her feel like she doesn’t have a voice in this process because the system can’t support the weight of this development.”  Anthem Highlands residents who reported a likely hydrogen sulfide leak on Nov. 6 were also previously dissatisfied with the City’s handling of their complaints.