A line of cheering supporters greeted City Council Members before they headed into their 5 p.m. Executive Session “for legal advice and to direct negotiators regarding Extraction’s Operator Agreement and Comprehensive Development Plan (CDP), mineral interests within Broomfield, and oil and gas regulations, including proposed regulations.”  Approximately eighty adults and children attempted to inspire Council conversation in the Executive Session with signs like “Make Regs As If Your Kids Live Near” and “Thank You for Protecting Us.”  Several Council Members shook hands with the supporters to thank them as they walked into Council. 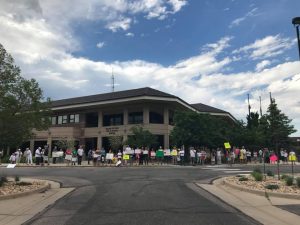 After a slight delay until 6:15 p.m., Council began its Study Session to thoroughly review the proposed oil and gas regulations. This special review was requested during the May 8 Council Meeting when the first reading of the regulations in Ordinance No. 2067 passed by a vote of 6-3.  Council Member Kimberly Groom was absent from tonight’s May 30 Study Session.

Director of Special Initiatives Tami Yellico and Special Counsel Elizabeth Paranhos provided a summary of additions made to the regulations since they were passed on first reading on May 8.  Ms. Yellico stated that one reason for the additions was to include more of the recommendations of the Oil and Gas Comprehensive Plan Committee.  As listed on pages 5 -6, these recommendations included, among others:

Ms. Yellico also pointed out that the text of Ballot Question 301 was used on the first page of the document in section 17-54-010 to describe that the regulations’ purpose was “to be an exercise of the land use authority of the City and the City’s plenary authority to regulate all aspects of oil and gas development, including land use and all necessary police powers, as set forth in Broomfield Municipal Charter, Section 2.1.b..”  Council Member Shelton stated that it was good to put the 301 language in the document because it was what the citizens went to the ballot for, adding that he was “going to be willing to defend the regulations.”  Council Member Law-Evans pointed out that some aspects of the drafted regulations were similar to those of Thorton but that the difference was that Broomfield citizens passed 301 and they were “honoring the intent and practicalities of 301.”  Council Member Beacom stated that the 301 Committee was keeping them educated on what their ideal was and that he thought the draft regulations were close to that ideal.  Council Members Shaff and Erickson both commented that they thought the regulations did not go far enough to implement 301.

Ms. Yellico stated that the Staff would be meeting with State COGCC Director Julie Murphy in the next few weeks to propose rulemaking to increase the requirements for financial assurance from operators.  In response to a question from Council Member Castriotta, Ms Yellico said that on June 12 she expected Council to have the first reading of an ordinance to increase City operator fines to the maximum of $2650 allowed by the State.  There was also discussion of increasing the City’s operator project application fee from $500 to $5000, in addition to the operator covering consultant costs of the City incurred in processing the application.

Setbacks came up for various reasons.  Mayor Ahrens was concerned that the increased setbacks in the regulations would not allow the City’s planned reservoir near the Livingston Pad to be expanded to accommodate future Broomfield dense housing developments, but Assistant City Manager Standbridge stated that this concern would be addressed in the annual water usage report in a few months.

Council Member Shaff repeated his position that the setback requirement must be applied to its fullest extent to the development of new homes away from existing wells, without an allowance for exceptions as listed in the regulations.  Assistant City Manager Standbridge stated that Council needed to consider what a half mile radius around an existing well might effectively do to housing development.  On page 31 in Section 17-54-090 (JJ), it states, “All new surface developments must conform to the following setback requirements: (1) Be no closer than 1,320 feet to an existing oil or gas well, unless there is written notice and informed consent from each individual surface property purchaser and owner.”   Council Member Castriotta asked that Council’s “loophole” conversation pertaining to this regulation occur sooner rather than later.  Council Member Law-Evans said that it was not a loophole so she did not want study of this matter to delay the second reading of the regulations scheduled for June 12.

The regulations require that for plugged and abandoned wells that there be “a soil gas survey of the abandoned well prior to production from the proposed well and again one (1) year and then every three (3) years after production has commenced.”  Council Member Shaff asked if these inspections should occur more frequently, a concern expressed by him previously on behalf of Anthem Ranch and Wildgrass residents.

Council Member Erickson was very interested in knowing where Extraction and other operators would be getting their fracking water from.  CCOB Attorney Gilbert pointed to BMP 41 on the Extraction permits requiring that Extraction tell the City where its fracking water was coming from before usage.

Council Member Kreeger suggested that the City add that any operator applying to the City be required to provide a root cause analysis of all past incidents.  Council Member Shelton questioned if a local government could require that and the Staff referred the discussion to Executive Session.

Council Member Shaff continued to voice his support of a separate Oil and Gas Commission to handle permitting and related regulatory matters.  He had brought this up previously, but for the first time he received support for the idea from Council Member Tessier.

Citizens are encouraged to review the regulations and submit their comments to Council or Staff in advance of the second reading and likely final vote on June 12.