On Tuesday, August 7, 2018, citizens held a short rally prior to a scheduled Broomfield City Council meeting. The brief public meeting was held in order for the Council to hold a public vote to approve an Executive Session whose purpose was to obtain legal advice regarding the Extraction Comprehensive Drilling Plan (CDP) and its potential approval.

Approximately fifty Broomfield residents chanted “Safety and Health, not Fracking Wells,” led by resident Heidi Henkel.  Citizens held homemade signs to greet City Council members as they entered the City County Building at 1 Descombes. In attendance was resident Ron Booth, dressed as Captain America, holding a shield emblazoned with the words “frack off.”  A few Council persons smiled and waved as they entered the building. 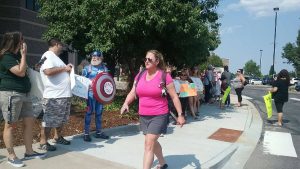 At 4:00 p.m as the meeting was set to start, residents entered the City-County building. The Council Chambers are currently being renovated, so the meeting was held in the Council Conference Room. Nine Council members were in attendance as well as 6-7 staff members and CCOB Attorney Sean Sullivan, who was on hand to advise Council on approval of Extraction’s CDP.

A staff member stood at the door of the conference room and invited residents inside. At first only a few entered, but eventually about 25 residents lined the walls of the conference room. Council seemed unprepared for citizen attendance.  Had they anticipated this, they might have held the meeting in another larger space. Moving to a larger space was discussed but eventually dropped.

Council Member Law-Evans began by saying she “didn’t feel that having this many people in the room felt safe.”  Council Member Kim Groom stated that the room was “not the appropriate space to have a controversial issue discussed.”  Ms. Groom also thought it was “a safety issue.”  Council Member Mike Shelton stated that “the longer the meeting is delayed” that it might force them to be there until 9-10 pm or even midnight.  He said he thought “a few representatives could make statements.”

Council Member Elizabeth Law-Evans stated that “if one person becomes disrespectful” that the Mayor should clear all citizens from the room.

The reason for this public portion of the meeting was to decide whether or not council should obtain legal advice. Abruptly, CCOB Attorney Sean Sullivan left the room for a few minutes, presumably to determine whether citizens were allowed to be present. When he returned, citizens were allowed to stay and each make a one minute comment with a twenty minute total for all comments.

Seventeen residents spoke, mostly to encourage the City Council to take their time to make sure that the CDP proposed by Extraction Oil and Gas was thorough and complete.  Other residents told City Council that they were behind them and wanted to work together with Council.

One resident said that doctors were beginning to tell residents they should move out of this area in order to protect their families. Other residents referenced that a Risk Analysis should be completed before proceeding with approval of the CDP. Another resident asked for Council to take legal action to protect residents. Resident Neil Allaire said he felt there was openness in review of the CDP until July 6th, and then Council and Staff fell silent leaving residents feeling ignored and left out of the process.

Resident Anne Marie Cleary encouraged City Council to use every tool and every angle possible and to not stop yet. She said, “This is a false summit.”  Resident Ron Booth asked City Council to “seek meaningful legal counsel as numerous oil and gas lawyers versus elected officials” just isn’t a level playing field.  Mr. Booth said that “more studies should be examined.”

Even Commerce City Community Advocate Kristie Douglas lent her voice to say, “This is not a win/win situation and Broomfield should move towards renewable energy.”

After the seventeenth speaker finished, citizens exited the room.  Some were interviewed by Channel 7 News to be used in a story the Channel is working on.  Later that evening, citizens got word that they would be able to speak again at the next special City Council meeting, to be held at 5:00 pm. on Tuesday, August 14, 2018.