Despite numerous previous resident complaints and pressure from both the City and County of Broomfield (CCOB) and the Colorado Oil and Gas Conservation Commission (COGCC), Extraction has informed CCOB that they are considering changing drilling mud in the next three weeks.  This could impact drilling on both the Livingston Pad and the Northwest A Pad, which would be going on simultaneously.  No reason for the possible change was given in the announcement, but it may involve cost reduction steps as it was known that the new Neoflo 4633 was much more expensive than the previously used Gibson D822.

Here is the 8/29 announcement from CCOB:

“Extraction has informed Broomfield that they are considering changing to another synthetic drilling mud called EDC 170, in the next 3 weeks. Broomfield has been very clear with Extraction, that changing the drilling mud to any type of mud that is not proven to produce the same outcomes – as safe or safer (the composition of ingredients), similar or better odor release, is not acceptable.”

“We have formally requested that COGCC review Broomfield’s concerns.   The staff has reviewed the Total products website and it claims that the product is odorless. COGCC suggests that we request a sample to determine if there is odor and to request that we request additional information from the company that produces the drilling mud, which we have done.  Staff is also reviewing the Safety Data Sheet for this proposed drilling mud and will follow-up on questions with Extraction and the company that makes the drilling mud.”

“Staff will continue to pursue answers to our concerns and push Extraction not to implement any changes unless they do not increase odors or adversely impact health and safety. Additionally, the Operator Agreement is silent to any notification regarding operational changes (drilling mud and/or usage of Tier 4 quiet fleet) – the recent heads-up was a ‘courtesy’. Staff will provide updates frequently as this communication continues.” 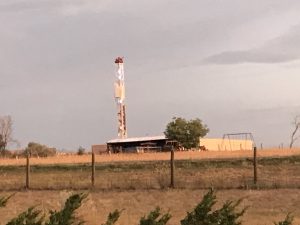 There was evidence of the importance of the drilling mud change at the August 27 Council Meeting.  The Second Quarter Air Quality Monitoring Report showed that the change in drilling mud to Neoflo 4633 reduced VOCs that would have otherwise impacted sensitive populations.

You can write City Council about your concerns about drilling mud at council@broomfieldcitycouncil.org