At the June 11 Colorado Oil and Gas Conservation Committee (COGCC) Hearing in Greeley, about twenty Broomfield residents heard COGCC Director Julie Murphy address emails she had received from Broomfield residents asking questions about the June 1 approval of the Extraction (XOG) Livingston Pad permits by the COGCC.  In particular, the residents asked why the Best Management Practices (BMPs) attached to the Extraction Livingston Pad permits fell far short of those in the XOG Operator Agreement (MOU) with the City.   Director Murphy stated that the State only attached the BMPs that were within their “statutory authority” and “expertise” to enforce, using similar language to that in her June 1 email notifying the City of COGCC approval of the Livingston Pad permits.  However, she pointed to the City’s authority to legally enforce the rest of the BMPs that were not attached to the permits, stating “the fact that a term of the MOU is not on the permit has nothing to do with its enforceability between Extraction and Broomfield.”

Director Murphy indicated that the unprecedented process involving the MOU and residential drilling in Broomfield required her to make difficult decisions.  “We’re not passing judgment [on the BMPs], but I am just not comfortable asking my field staff to enforce a provision not within its jurisdiction.”  After referring to COGCC Assessment Supervisor Greg Derenleau as being present to take any questions from the nine COGCC Commissioners, Director Murphy added, “I know it is an important issue to the Front Range.”

During Commissioner comments, Commissioner Erin Overturf asked Director Murphy if the Livingston Pad should have had a COGCC hearing at the same time as the other Extraction pads on July 30 and 31.  Commissioner Overturf reasoned that it would restrict the Commission’s ability to fully deliberate on the locations for the six Extraction pads in the Operator Agreement if the location of the Livingston Pad was already decided prior to hearings on the other pads.  Director Murphy said that the COGCC was following directions from their October hearing where only the Northwest and Interchange Pads were granted hearings due to the request of the Adams County Commissioners. 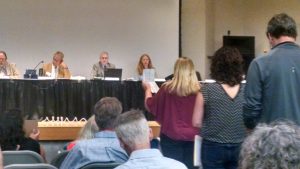 In the public comments by Broomfield residents at the beginning of the hearing, they presented petitions and statements from Broomfield groups asking the COGCC to reconsider its approval of the Livingston Pad.  Cristen Logan presented a Broomfield Concerned petition with 978 signatures of Broomfield residents who “objected to COGCC approval of any of Extraction Oil and Gas’s applications and associated permits related to Extraction’s proposed oil and gas development in Broomfield, unless and until serious deficiencies are addressed.”  Lizzie Lario presented a statement from the Wildgrass Oil and Gas Committee asking for due process for Wildgrass mineral owners since the COGCC had denied discovery on Extraction profitability.  Dylan Lario also highlighted a letter written to Governor Hickenlooper requesting that he tell the COGCC to reverse its permitting of the Livingston Pad and deny the rest of the Extraction permits until it could be proven that citizens’ health and safety was protected.  This letter was sponsored by several Broomfield neighborhood groups, including Anthem Ranch Oil and Gas Education Group, Broomfield CAN/One Broomfield Indivisible, Broomfield Clean Air and Water, Broomfield Concerned, Broomfield Health and Safety First, Broomfield Moms Active Community, League of Oil and Gas Impacted Coloradans and Wildgrass Oil and Gas Committee. Nick Kliebenstein of Front Range Energy Alliance encouraged the COGCC to approve all of the Extraction permits in his public comment.

Broomfield residents attending the hearing were also interested to find out further information about the June 7 Extraction Windsor “Milkshake” well accident.  In a June 8 email response to the City’s questions regarding this Extraction accident, COGCC Local Government Designee Marc Morton had indicated that COGCC Director Julie Murphy would give further information about the cause of the accident at the June 11 hearing.  However, Director Murphy did not provide any information to add to the June 8 COGCC initial report which provided no cause.

There was a renewed request for school setback rulemaking at the COGCC.  Speaking on behalf of the League of Oil and Gas Impacted Coloradans (LOGIC) during public comments, Attorney Matt Sura asked the Commissioners to reply to a petition for rulemaking made six months ago.  In subsequent discussion, the Commissioners voted to review the petition at their July 30 hearing.

During the report by Director Bob Randall of the Department of Natural Resources (DNR), he stated that there had been a temporary fix for this year’s underfunding of DNR caused by the rebate of severance taxes to oil and gas operators.  He added that a new financial forecast was due on June 20 and that the problem still needed a long-term solution.

At the July 30 and 31 COGCC hearings, the Extraction Interchange A & B and Northwest A & B Pads will have hearings as previously granted by the COGCC at the request of Adams County Commissioners.  Signups to speak during public comments will open on July 25.  Extraction is restricted by the Operator Agreement from drilling on any Broomfield pad until the Comprehensive Drilling Plan (CDP) is approved by the Broomfield City Manager.