In a unanimous straw poll vote, Council denied Crestone’s request to lift the moratorium in order to process their application for the Goltl 26H-0168 pad. Crestone attorney Jason Oates stated that, “Crestone will likely be forced to force a different path to make sure we maintain our lease hold.”  Broomfield residents Jean Lim (author) and Laurie Anderson spoke in favor of denying Crestone’s request and many residents had also written CCOB to deny the request.  The City and County of Broomfield (CCOB) has consistently stated since the submission of Crestone’s Use by Special Review July 2017 application that Crestone has refused to even accept Best Management Practices as outlined in Extraction’s Operator Agreement.

Council held an Execution Session titled, “Request for an Executive Session for Legal Advice and to Direct Negotiators Regarding Extraction’s Lease Offers and Pooling Applications.”  There are still outstanding spacing units in the Broomfield Extraction project that are not approved by the Colorado Oil and Gas Conservation Commission (COGCC).  Wildgrass Oil and Gas Committee continues to protest the permits and forced pooling of these Extraction Broomfield project spacing units.  CCOB sent a demand letter to Extraction on September 5 and has not received a written response to its request for Extraction to continue to use Neoflo 4633 drilling mud and Tier 4 engines.

During the Oil and Gas Update at the Sept. 24 meeting, Council Member Castriotta asked for the status of citations issued to Crestone and Extraction for code violations on wildlife impacts.  The citations were issued on July 8, the hearings had already been postponed once at the request of the defense attorneys, and the new hearings had been set for Sept. 24. CCOB Attorney Sullivan replied to Council Member Castriotta’s inquiry that the hearings were again continued until December at the request of the defense attorneys. 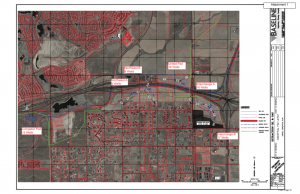 As of September 24, the status of Extraction’s project was: