The motion to reconsider Ordinance 2095 brought forward by Council Member Shaff failed at the August 20 Council Meeting, so citizens will not be able to vote on a charter amendment regarding Open Space usage on the Nov. 5 ballot.  The charter amendment proposed in Ordinance 2095 would have caused a “change of use” trigger if Open Space were proposed to be used for mineral extraction, as it would have closed a current exception in Charter Section 18.3(b)(3) (B). As described in Charter Section 18.3(b)(1), any change of use proposed for mineral extraction would then have caused a robust review process by the Open Space and Trails Advisory Committee at a public hearing with proper notice and then followed by an approval or denial by Council.  With the failure of the ordinance, the current process will stay in place which allows for Staff members to decide if Open Space is used for mineral extraction.

No – Mayor Ahrens breaking the tie. 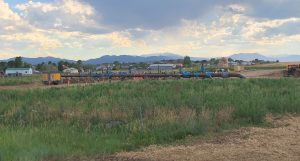 In voting against the motion to reconsider, Council Members Erickson, Groom and Beacom did not make Council comments.  Council Member Shelton cited the need for elected representatives to make these decisions and the fact that there were liability considerations that made it a citywide issue.  Council Member Law-Evans stated that the measure was being rushed since there was a moratorium and the best way to protect open space should be studied.  Mayor Ahrens referred to the passage of such an ordinance limiting Council in siting opportunities for oil and gas developments and other opportunities to change zoning together.  He also referred to it not being cost effective to have a special election.  However the measure would have been part of the Nov. 5 regularly scheduled elections.

In voting for the motion to reconsider, Council Member Kreeger framed it as a vote to ask the residents what they want and to allow for a public process for review of a proposal to use Open Space for mineral extraction.  Council Member Castriotta, who originally proposed the ordinance, stated that in October 2017 she had already asked Staff and the Open Space and Trails Advisory Committee why there was this exception and no one could tell her.  She stated, “If we are taxed for Open Space, we should get a say in how it is used.”  Council Member Tessier stated it was her “moral obligation” to protect Open Space “even if it is not legal.”  She thanked the Staff and residents for addressing this but asked for “more than binary thinking” and “civil discourse.” She stated that, “Broomfield will continue to push boundaries whether or not this vote passes.”

You can read about the July 23 Council Meeting consideration of Ordinance 2095 here.