The drill rig now appears to be in place on the Interchange B Pad, as shown in the picture below taken from Huron and 149th towards the Interchange Pad east of 156th and Huron.  This follows a week of complaints filed by nearby residents about noise during the night and trucks continuing to violate traffic routes.

According to the City’s announcement posted on April 15, the spudding of the ten wells on Interchange B by Extraction was completed by the beginning of the week and the drill rig was to be assembled this week.  “Drilling operations with the primary rig are expected to begin in mid to late April.  Drilling on the Interchange B pad will continue on to late May and possibly early June.” 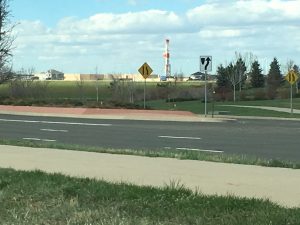 Nearby residents filed numerous complaints this week about construction-related noise and traffic violations near the Interchange B pad.  A semi headed toward the pad followed an unapproved route, going westbound on 160th and turning left on Huron causing a huge backup at 3:45 pm one afternoon.  There was excessive noise during off peak hours, including all through the night of April 16 into the morning of April 17.   A huge lighted truck drove across the Open Space haul road at 9:46 pm.  With daylight, residents could see trucks lined up on the haul road at 6:30 am after the trucks had headed east from Sheridan and were waiting to start into the Interchange B Pad.

Several Council Members and residents questioned the City’s April 15 Oil and Gas page announcement which showed a huge water truck as equipment to be used during the drilling phase.  Under the Operator Agreement, it states that, “All fresh water shall be transported to the Well Sites by means other than by truck.” (Exhibit B BMP #3 p. 24)  The COGCC even attached that Best Management Practice (BMP) to Extraction’s Form 2A Document Number 40147700 Location 456747 for the Interchange A & B Pad.  BMP #35 on Document Number 40147700 states, “35 Drilling/Completion Operations All fresh water for completions shall be transported to the well site via temporary water lines.” The City Staff replied that, “For the current stage of drilling at the Interchange B pad synthetic mud will be used and the trucks Extraction is [sic] using to haul synthetic based mud to location resemble water trucks.”  When asked by Council Members for a specific reference to the Operator Agreement as to how these water trucks were allowed, the City did not reply with a reference.  When asked by Broomfield resident Jean Lim (author) for an estimate on how many water-size trucks would be needed during the drilling phase to haul synthetic mud to the site, there was no reply.  This is an obvious concern based on the City’s controversial HAZID that identified truck traffic related accidents as the biggest risk with the Extraction project.

Residents of any county can use the resources listed here to report any violations that you see.  http://broomfieldconcerned.org/register-your-concerns/

UPDATE:  Here is the City’s response to questions about water truck usage during the drilling phase: “The discussion of water pipelines in the agreement [Operator Agreement] was all in the context of fracking and completion. This makes sense since those are the most water use intensive phases of the process and likely that was the focus. There is not a mention of the drilling phase. It could have perhaps been more expansive, but it wasn’t.”

“Extraction stated that the water will be used in the drilling phase for mixing the cement for the casing, dust suppression, reclamation (if required) and potable water.
Water Trucks – Bobtail Units (pictured below, Not a tractor & trailer) ~ 2 to 5 per day on average
So typically it takes about 10 Bobtail Units per well to support the cement operations and those loads are spread out over a number of days
About 1 truck per day to support general use (dust control, pressure washing, ect)
Potable Water truck is about 1 every 3 to 4 days” 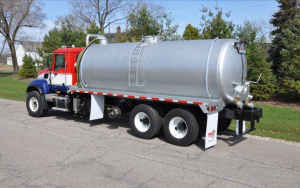