In separate announcements today, the City and County of Broomfield relayed that Extraction will be drilling on the Northwest A Pad at the same time that they are completing (fracking) two additional wells on Interchange B. That puts the residents of Northstar Estates in the bullseye for simultaneously being exposed to oil and gas operations from both the north and west. Please see the map below. 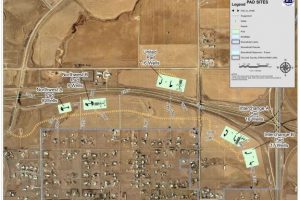 By the end of the week, Extraction plans to move the 100 foot drilling rig from the Livingston Pad to the Northwest A Pad after completing drilling of the 18th well on Livingston. Extraction has permits to drill 16 wells on the Northwest A Pad, the pad located south of Northwest Parkway, West of Huron, and East of Sheridan Parkway. Extraction will be continuing to use Neoflo 4633, the synthetic based drilling mud that replaced Gibson D822 that caused numerous health issues when it was used at Interchange B and during the beginning of drilling on Livingston. However, residents living near the Livingston Pad are still experiencing health symptoms during Livingston drilling with Neoflo 4633, with patterns emerging that the symptoms most frequently occur when drill cuttings are being removed.

Extraction will also move completions equipment to Interchange B to frack 2 additional wells that are already drilled. After those completions, the equipment will be moved to Livingston, setting completions there to begin around the end of November. It is widely recognized that the greatest risk for emissions is during the flowback part of the completions phase. The current timetable sets flowback for around May 2020. https://broomfield.org/…/Current-Broomfield-Project-Schedul…

You can read CCOB’s announcement on the drill rig movement from Livingston to Northwest A here https://www.broomfield.org/CivicAlerts.aspx?AID=1716

You can read CCOB’s announcement on the fracking of 2 additional wells at Interchange B here
https://drive.google.com/…/17_QbL9xh933PVYuQVzJ9M5hb8I…/view