In a remarkable vote following extensive public comment and an Executive Session, the Erie Board of Trustees voted to reject the Amended and Restated Operator Agreement between Erie and Crestone.  This agreement would have increased the number of wells on the Acme Pad at the corner of Highway 7 and Bonanza Drive from 16 to 30 wells, greatly impacting the surrounding residents of Erie, Anthem Ranch and Anthem Highlands.  The 3-4 vote on Resolution 18-400 was:

The next question is if Crestone will follow through on its threat to file permits with fewer Best Management Practices (BMPs) for the Vessels and Acme Pads on November 1 with the Colorado Oil and Gas Conservation Commission (COGCC).  If the Amended Operator Agreement had been approved, they would have filed only the permit for the Acme Pad with the increased number of 30 wells in line with the new agreement and its BMPs.

During public comments that lasted about ninety minutes, a dozen impacted Erie residents presented their concerns regarding the Operator Agreement, in addition to residents and representatives from Broomfield.  Erie resident Rachel Balkcom first presented a petition with the signatures of 491 Erie and Broomfield residents and ten neighborhood organizations asking to delay the vote.  She also questioned the legality of the silent negotiations and called it “ungenerous” of the Board to provide only five days for public comment.  Several Erie residents pointed to the lack of study on the traffic impact that a large number of trucks from the proposed Acme Pad would have on Highway 7.  Erie resident John Bednar appealed to the Board to spend more time reviewing the Agreement in line with peer-reviewed, academic studies in order to protect public health, safety and welfare. One Erie resident asked why the Board was rushing forward with this and what went wrong that “five of the Board members” could be choosing to “go down this wrong path.” 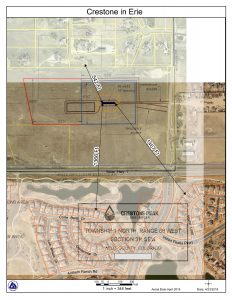 Eight Broomfield residents from the impacted neighborhoods of Anthem Ranch, Anthem Highlands and Wildgrass made public comments to reiterate many of the Erie residents’ concerns, along with asking that Broomfield be allowed to have input into the review of the Agreement.  Assistant Director of Public Health Laura Davis represented the City of Broomfield in presenting the City’s October 30 letter sent to Erie which listed sixteen comments where Broomfield pointed to further mitigations that Erie might consider.  Ms. Davis stated that Broomfield would like to collaborate with Erie, especially on an air quality monitoring program.  Council Members Kreeger and Shaff stated they were speaking for their constituents and not the City when they pointed to the disproportionate impacts on Anthem and Wildgrass residents due to wind direction and topography of the Acme Pad.  Council Member Shaff asked the Board to take their time with the Operator Agreement, making sure there would be no surprises like other municipalities encountered after rushed negotiations.

When the Board came back from their one hour Executive Session, Mayor Carroll asked Jason Oates of Crestone to come forward to state what Crestone’s immediate plans were if the Amended Operator Agreement was rejected by the Board.  Mr. Oates replied that if the Operator Agreement was rejected that Crestone would file COGCC permits on November 1 for both the Vessels and Acme Pads under the previous Operator Agreement that had fewer Best Management Practices (BMPs).  Mayor Pro Temp Deakin began Trustee comments by stating that he was not happy with the Amended Operator Agreement but that it “sucked less” and “was the best we can do right now without losing the deal” for increased BMPs.  Trustee van Woudenberg asked if the Trustees were meant to uphold business negotiations or were “elected officials meant to protect health, safety and welfare,” citing that “we have more work to do.”  Trustee Haid said it was better to vote for the Amended Operator Agreement so that there was one pad instead of two and so that Erie could hold this agreement as model for other operators.  Mayor Carroll reiterated some of the same arguments for approval, adding that the process had allowed for resident input, in contrast to claims made earlier by residents.  She stated that she did “not want to call them [Crestone] on their bluff” because she did “not want to lose out on safeguards for the residents.”  Trustee Woog said there had been insufficient public engagement allowed in the process and that Erie had given up too much in the negotiations as far as financial allowances for moving the wells to Acme and decreased setbacks at the Acme Pad compared to the Vessels Pad.

When the vote on Resolution 18-400 finally occurred, Trustee Deakin moved it to the vote and then there was a pause when no other Trustee would second it.  Mayor Carroll seconded the resolution and it failed 3-4.  The meeting then adjourned with outstanding questions about Crestone’s next move.