On Friday, December 7, the Colorado Oil and Gas Conservation Commission (COGCC) sent Broomfield notice that it had approved Crestone’s permits for the Goltl Pad and its 26 wells in the northeast corner of Broomfield.  The Goltl Pad is located east of I-25, approximately one mile north of E. 168th Avenue, and one quarter mile west of County Road 11.  The map of the Goltl Pad can be found here or below.  On October 2, Broomfield had previously filed a claim against the COGCC for its July 31 approval of the spacing unit containing this pad.

This means that Crestone will have to submit drilling plans to Broomfield under the new oil and gas regulations with final approval by Council.  On February 23, Crestone had submitted a use by special review application with subsequent talks being referred to as difficult by Staff at Council Meetings.  The December 11 Council Meeting Oil and Gas Update states that Crestone has submitted an emergency response for the Goltl Pad which is under review by the Staff.  The Staff also attached the approved Form 2A to its memo, noting that it lists the Best Management Practices that the COGCC approved as part of the permit. Please read the Form 2A document here. 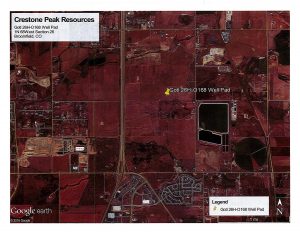 This oil and gas development is going forward in spite of Broomfield filing a complaint against the COGCC on October 2 in objecting to COGCC approval of the Crestone spacing unit application at their July 31 hearing.  In that complaint, the City summarized its claims as follows:

At the July 31 hearing, Broomfield Special Counsel Phil Barber had objected to the health and safety impacts of the pad on Broomfield residents by stating that the Martinez v. COGCC Court of Appeals ruling in favor of Martinez was current law in Colorado. The commissioners were also not persuaded by objections raised that Crestone had not properly submitted their spacing unit applications for multiple wells or efficiently sized the unit to drain the minerals.