After two years of working to make changes to forced pooling laws at the Statehouse, Broomfield mineral owners can finally see the first steps in the right direction. SB 18-230 Modify Laws Drilling Units Pooling Orders, sponsored by Rep. Matt Gray, Rep. Lori Saine and Sen. Vicki Marble, was signed into law by Governor Hickenlooper at the Colorado Department of Energy on June 1.  It will make some improvements to a 1951 statute to better reflect current horizontal drilling, especially in residential neighborhoods where homeowners own their mineral rights. 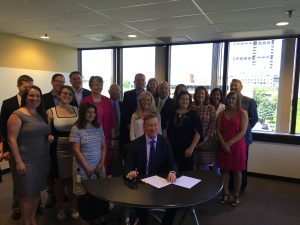 The bill as amended includes:

– elimination of liability for forced pooled mineral owners
– extension of notice from 35 to 60 days
– clear information about mineral owner options to be included with the required operator leasing offer
– removal of the 300% penalty for operator recovery costs, rolled back to the previous 200% level (amendment to SB 18-230)
– effective date so that Broomfield mineral owners in currently approved spacing units would be covered by the provisions of this bill (amendment to SB 18-230)

The bill had bipartisan support which enabled passage.  Included as a supporter was the Colorado Oil and Gas Conservation Commission which will implement the new provisions of the statute.  The Colorado Municipal League testified for the bill and Broomfield City Council had previously stated their support of it.  The oil and gas industry testified for the bill.  However, the industry had not been in favor of further provisions which many would have liked added.  These included greater transparency and changes in the threshold for forced pooling from one mineral owner per spacing unit to 51% which is more in line with other states.