Anthem Highlands residents at the Community Meeting on Monday evening pointed out to Broomfield Staff that the map they were using of the area was about two years outdated. That map did not show the nearby occupied houses and houses under construction in the immediate vicinity of the methane leak near the Davis 43-6 plugged and abandoned well. Since the houses were not shown, residents stated that the map did not accurately portray the danger to nearby residents from the methane leak. The map also did not contain a location for nearby Thunder Vista P-8 School. At the Monday meeting,Broomfield staff said they would post an updated map later and that is now posted on Oct. 2 here. 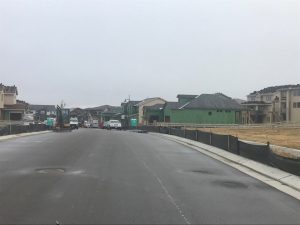 Anthem Highlands resident Laurie Anderson took the photo at the right and sent it to the City to provide a true visualization of the area. The manhole in this picture should be the same as “Manhole 6” in the presentation where further testing is occurring. The view is looking north up Graham Peak Way from just south of that manhole cover. Many occupied homes are shown to the east.