The City of Broomfield announced today that new oil and gas development permits have been filed with the Colorado Oil and Gas Conservation Commission (COGCC) that include a small portion of Broomfield off of Indiana Street, in the area near the Rocky Flats National Wildlife Refuge.  Highland Natural Resources Corporation has filed five drilling and spacing unit applications and 62 Form 2s (well permits) for the area that is largely in Jefferson County but also includes a small part of Broomfield.

The City announcement states, “Based on the COGCC website Highlands Natural Resources Corporation requested [a] 9 well pad site located in the NW Corner of SH 128 and Indiana St and it looks to be in the Town of Superior. The closest well is approximately: 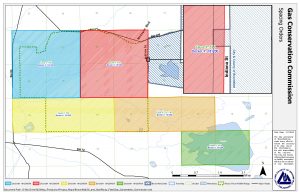 ○ 3,173 feet to the nearest apartment complex in Broomfield (The Ridge at Broomfield subdivision), and

○ 1449 feet to the nearest residential house in the Town of Superior.”

The discussion of these permits will be on the Nov. 13 Council meeting agenda.  If the City has mineral rights within the spacing unit, the City would have standing to protest this permit at the COGCC.  Look for further updates closer to the Nov 13 Council Meeting.  If you would like to write Council now, please email  council@broomfieldcitycouncil.org