While many Broomfield residents are focused on the August 1 COGCC hearing on the proposed Extraction Interchange and Northwest Pads, other weighty concerns are also being raised about potential pads just to the north of Anthem Ranch and Anthem Highlands.  There are three spacing unit applications on the July COGCC Agenda which are the first step in putting more mega pads near and in northern Broomfield.

Looking at the map is the best way to see the impact that these pads could have on residents in the northern part of Broomfield and their neighbors in other jurisdictions.  Please see the map here. 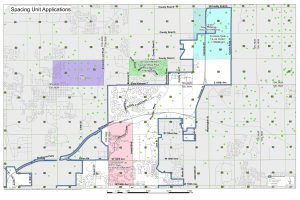 The area in green is Extraction’s Coyote West spacing unit for the area just north of Anthem Highlands which is sited in Erie. It requests approval of up to 12 horizontal wells in that area.  It is included in the consent agenda for Wednesday, August 1, which means it has not been protested and would be expected to be approved by the Commissioners. See docket number 180400351 on the agenda.

The area in purple is 8 North LLC’s spacing unit application for the area just northwest of Anthem Ranch.  Boulder County and Lafayette filed protests for this area and it is on the COGCC agenda to be heard Tuesday, July 31 at around 11 am.  8 North LLC is a subsidiary of Extraction.  It requests approval of up to 20 horizontal wells.  See docket number 171200773 on the agenda.

The area in blue is Crestone’s spacing unit application for the Gottl Pad in the northeast corner of Broomfield. Broomfield filed a protest for this area and it is on the COGCC agenda to be heard Tuesday, July 31 at around 3 pm.  See docket number 170900522 on the agenda.

Sign-ups to speak are closed, but written comments can be sent to: julie.prine@state.co.us.