The City and County of Broomfield (CCOB) announced today that work by the Colorado Oil and Gas Conservation Commission (COGCC) to repair Davis 43-6 well will begin on Tuesday, October 22. This follows the determination by the COGCC that the elevated routine soil gas measurements by CCOB were due to a methane leak caused by faulty plugging and abandoning of the well.

Also in the announcement: 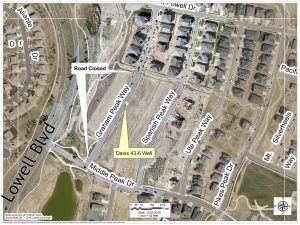 Road closures:
“A portion of Graham Peak Way, from the trail crossing down to Middle Peak Way will be closed to traffic for the duration of this work, as shown on this MAP. Spanish Peak Way and the portion of Graham Peak Way north of the trail will only be open to local traffic. Temporary “no-parking” signs will be placed on Lowell Blvd. between Prebble Creek and Anthem Ranch Road.”

Notifications:
“The updates and notifications have been sent out on all social media channels, B-in-the-Loop, and on the web site. Additionally, HOAs and schools have also been notified, and will continue to be. An SRO will be at Thunder Vista tomorrow morning and periodically throughout the day to address any concerns of parents, staff, or children. School security is aware of the work and prepared to assist with any issues that arise.”

Oversight:
“The North Metro Fire and Rescue District, Broomfield’s Oil and Gas Inspectors, in addition to the other staff, will be onsite at the Davis 43-6 plugged and abandoned well site as the project proceeds. Staff will be sending daily updates throughout the process.”

You can read the rest of the announcement here.

10/22: Update from CCOB: “Present at the well site were COGCC’s environmental and Orphaned Well Program staff, North Metro Fire and Rescue District (NMFRD), Broomfield Police Department, and Broomfield’s Oil and Gas Division. The work consisted of cutting a hole in the pavement at the well site and using a hydrovac to apply water and then remove dirt. The dirt removed will be trucked from the site for disposal. The COGCC removed dirt down to approximately 12 feet at 4 pm today. Throughout the day safety protocols were followed including traffic control and air monitoring, by NMFRD , Broomfield’s contractor, ERO, and NMFRD.”
“The air monitoring did not indicate any emissions of concern. COGCC has not yet reached the well and will resume its work in the morning.”

10/23: Update from CCOB: “In the process of continuing the excavation at the well site, COGCC uncovered a two-inch pipe that runs in an approximate north/south direction at a depth of 11 feet. COGCC staff believe this pipe was attached to the well casing. COGCC will bring in a larger excavator to expand the width of the hole in a northerly direction. The dirt will continue to be removed and trucked from the site for disposal.”