Extraction’s 30-foot spud rig is up on the Livingston Pad on Monday afternoon, June 3 as complaints about the health impacts of odor from the Interchange Pad and truck traffic violations near the Livingston Pad continue to be submitted to the City. Spudding is the initial drilling of the well with a 30-foot rig.  A 100-ft drilling rig will be used for the actual drilling of the 19 Livingston wells which may take about 22 weeks. (See Extraction’s timeline submitted to the City here.) 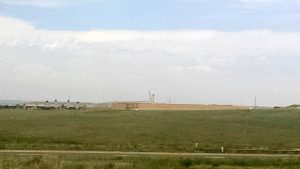 On both Sunday evening and Monday morning, residents living near the Interchange Pad reported that they were forced to shut their windows and stay indoors from odorous, carcinogenic Gibson D822 drilling mud that is being used by Extraction and approved for use by the COGCC.  Health impacts of irritated throats, coughing and irritated eyes were reported by residents to the City’s Complaint System and the COGCC inspector responded to the scene.  There were also reports of dangerous truck traffic route violations on Sunday as the drill rig and related equipment were brought into the pad by a triple trailer truck and other large trucks.

The Colorado Department of Public Health (CDPHE) CAMML was also spotted northwest of the Livingston Pad and southwest of Northwest Parkway to monitor air quality.  The City reports that the mobile unit CAMML will stay at Livingston during an unspecified period of the drilling operations.

There had already been many questions raised about increased traffic risk since the Sheridan Boulevard heave repair had been delayed.  In a June 1 Broomfield Oil and Gas Update post, the City stated that heave repair is now scheduled for June 17 and will be completed by June 28.  The post stated, “If spudding is still active on June 16, surface rig support traffic not previously cleared to access via the Lowell Blvd egress will shut down. No rig traffic will interfere with the Sheridan repair. Broomfield’s Construction Supervisor and Traffic Engineer will follow this process closely.”

These are the specifics of the truck traffic rerouting from previously approved routes during Sheridan repair, according to the Broomfield Oil and Gas Update post:.

If you have traffic violations and odor issues to report, please file your complaint with the City at https://www.broomfield.org/2842/File-a-Complaint