The City and County of Broomfield (CCOB) will hold a special meeting on Monday from 6 pm – 7:30 pm at the City Council Chambers to discuss a methane leak CCOB discovered during routine soil and gas testing in Anthem Highlands.  This evidence was found under the surface of Graham Peak Way where Davis 43-6 well is plugged and abandoned.  See map below.

CCOB will live stream the meeting and post the recording on their website later. Families who want to drop their children off in the adjoining conference room are welcome to do so, according to a Saturday morning email from the City Manager.

CCOB indicated that the methane is subsurface and is not airborne. The methane levels have significantly declined in subsequent testing; however, until the source is identified, additional sampling and monitoring is being performed.  Questions are being asked about why the public was not informed about this safety risk sooner. 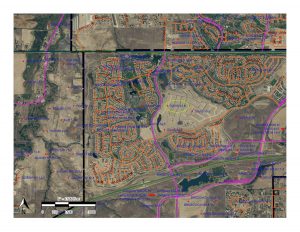 At the September 24 Council Meeting, Council Member Castriotta asked Director of Special Initiatives Tami Yellico about a brief statement in the monthly Oil and Gas report section titled “Broomfield Soil and Gas Testing Program” that “one of the wells is being monitored due to higher methane levels.” Ms. Yellico referred to the follow-up steps taken as further testing by CCOB contractor ERO, consultation with Excel and notification of the Colorado Oil and Gas Conservation Commission (COGCC).  According to CCOB’s September 27 announcement, CCOB Staff, representatives from COGCC, the Colorado Public Utilities Commission, and North Metro Fire Department will be in attendance.

The location of the meeting is still being confirmed and we will have an update on our website and Facebook page.