Please consider writing or attending Council on Tuesday, September 24 to ask that Council deny Crestone’s request to lift the moratorium in order to process their application for the Goltl 26H-0168 pad. Please see the map below of the proposed pad east of I-25, near the intersection of County Road 4 and County Road 11.  You can write Council at council@broomfieldcitycouncil.org

Item 11b on the agenda can be found here. Residents who want to speak on this item need to do so during public comments for that item. The current agenda for Tuesday’s Council meeting can be found here.  In a letter to Crestone’s attorney, Attorney Sullivan states that, “Crestone will be allowed to make a brief presentation. Members of the public are allowed to speak for 3 minutes a person on such topics.”  In Attachment 3 to the agenda item, City and County of Broomfield (CCOB) Attorney Sullivan defends CCOB from Crestone’s claims of violation of due process. 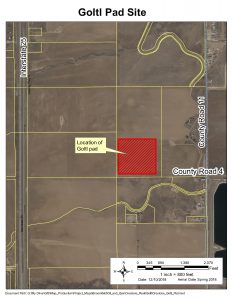 On May 28, Council issued a temporary moratorium until December 4 on the processing of any oil and gas development applications in order to allow the City and County of Broomfield to revise its oil and gas regulations in line with the passage of SB19-181 Protect Public Welfare Oil and Gas Operations. This gives local governments greater regulatory power to protect public health, safety and welfare.

Crestone sets forth its arguments for Broomfield’s processing of the application in Attachment 1 of the agenda item. They cite that their request began with the City in July 2017 and that Crestone “has a Surface Use Agreement with the fee surface owner, [and] holds 100% of the mineral leasehold underlying the Goltl Location.” It also states that, “Due to Broomfield’s obstruction and unreasonable delay of the Goltl USR process, Crestone hereby requests that this Council grant Crestone an exception to the May 28, 2019 Moratorium, direct Broomfield Staff to proceed with its review and analysis of the Goltl USR, and to schedule a hearing on the Goltl USR before the end of 2019. Crestone discussed this request with Mr. Sullivan and are informed that Broomfield does not have a formal process for such exception request, but that Crestone may submit this formal request to the Council.”