On February 15, Extraction will begin construction of the access road for the Northwest A & B, Interchange A & B and United Pads.  Please see the blue line on the map below.  The City’s announcement states that the construction will continue into April.  You can read the entire announcement here.

The construction of the access road and its continuing usage by Extraction will have the most impact on nearby Adams County residents.  They have expressed their concerns about noise, dust and traffic at Huron caused by Extraction’s usage of this road since the current pad sites were announced by Broomfield in October 2017 with the signing of the Operator Agreement with Extraction.  There were a few mitigations agreed to at the August 1 COGCC hearing that addressed some of the residents’ concerns.

The City’s announcement states that residents should contact Extraction with any questions at 720-974-7740.  However, Broomfield or Adams County residents with complaints should also file them with the City’s Complaint system and other systems listed here. 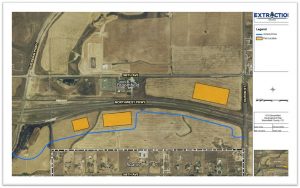