Only homes within a half mile of the Livingston Pad are receiving notices from Extraction about the start of construction of the 32 foot sound walls on May 17, according to a response from the City to an inquiry from a resident (the author).  This is despite the fact that the 1700 homes within one mile and 7000 homes within two miles will have clear visibility to the 32 foot sound walls on the hill and also be impacted by increased traffic at Sheridan and Lowell.  The City posted Extraction’s notice on its Oil and Gas webpage on May 7.

It seems that a few Anthem Ranch residents already received their notices.  It is not clear that anyone in Wildgrass will receive a notice, except the City replied that Extraction sent a notice to the Wildgrass HOA.  The City’s map of distances from the Livingston Pad does not even show the closest Wildgrass subdivision buildings, the Wildgrass townhomes, on its map.  A response from a Council Member indicated that requirements regarding notices have been discussed as needing revision in other contexts in addition to oil and gas. 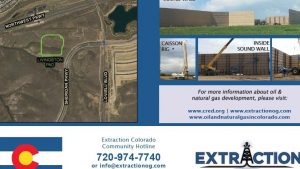 Extraction also told the City it will start drilling on the Livingston Pad on or around June 3.  In response to a question as to how many wells have been drilled on Interchange B since drilling began on April 20, Broomfield Director of Strategic Initiatives Tami Yellico stated, “Currently, Extraction is drilling the 4th well on the Interchange B Pad and they are expected to start drilling the 5th well by this weekend.”  The Operator Agreement states that, “The Operator agrees that the first Well Site where drilling shall be conducted shall be at either the Interchange A Pad or the Interchange B Pad (the “Initial Well Site”) and that at least eight (8) New Wells (the “Initial Wells”) shall be drilled at such Well Site before drilling can commence at any other Well Site.” The City did not respond directly to questions if it plans to announce when Extraction has met the requirements of the Operator Agreement in drilling on Interchange B and under what, if any, conditions the City would determine that the “test” drilling at Interchange B was not successful, except to state that inspectors are on site daily to monitor implementation of the Best Management Practices (BMPs).

There have been numerous complaints filed by residents living near Interchange B about truck traffic, noise and odor, with the petroleum odor complaints also citing adverse health impacts including headaches, asthma and nasal issues.  The City ‘s response has been that the inspectors are onsite making sure all Best Management Practices are implemented and have not noticed any irregularities.  Residents reminded the City that North Metro Fire actually smelled the odor when they responded.

Residents near the Interchange B Pad state that COGCC inspectors have actually been more responsive to odor complaints filed there and have gone onsite to talk with Extraction employees.  The residents near Interchange B have advised those who live near Livingston to always file with the COGCC as well as the City.  You can use the resources listed here to do so.  On the COGCC complaint, you should include Location ID = 455317 for the Livingston Pad.